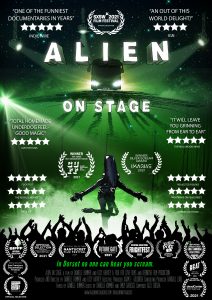 When an amateur British theater company decides to do something different for its annual holiday charity production, the crew goes out on a limb to stage something that’s truly out of this world – a theatrical adaptation of Ridley Scott’s sci-fi cinematic classic, “Alien.” As audacious as this undertaking might be, however, the play’s initial run in the company’s hometown of Dorset is a flop. But, when the show catches the attention of documentary directors Lucy Harvey and Danielle Kummer, the company’s fates change dramatically. The filmmakers help the amateur troupe secure an opportunity to stage a performance of the play in London’s West End – and to a sold-out crowd at that. Thus begins this chronicle of an unlikely production brought to life both on stage and in this hilariously offbeat documentary. While the film could use a little more background about the principal players, this wickedly funny saga about a horror classic transformed into a campy romp provides meticulous behind-the-scenes detail, intercut with footage from the film original to provide context and comparison. Most of all, though, this is a fitting tribute to all the underdogs out there who are willing to stick their necks out and attempt the untried, all the while having fun and ultimately attaining unexpected yet much deserved success.