Skip to content
Home/‘All In: The Fight for Democracy’

‘All In: The Fight for Democracy’ 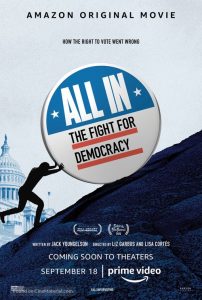 “All In: The Fight for Democracy”

No matter where one stands politically, most of us (or so I would like to hope) believe in a sense of fairness when it comes to our elections. However, as this documentary from directors Lisa Cortes and Liz Garbus details, the country is increasingly under siege from a growing campaign to deliberately suppress voter rights in states across the nation, exposing the myriad techniques being employed by self-interested parties to achieve that result. In telling its story, the film chronicles the history of voter rights from the days of America’s birth through Reconstruction to the Jim Crow Era and eventually the Civil Rights Movement. The picture illustrates the efforts of various constituencies, from African-Americans to women to Asian-Americans and Latinos, in winning and protecting what’s widely considered one of the fundamental rights of living in a democracy. But it then goes on to show insidious initiatives to turn back the clock, as exemplified by a number of emerging state legislative and policy actions, most notably the tactics used to manipulate the outcome of the 2018 Georgia governor’s race and the efforts to derail the campaign of Democratic candidate Stacy Abrams. This offering thus presents a reasoned and damning look at voter suppression efforts, emphatically delivering an urgent message we all need to hear if we hope to preserve our republic. However, despite the importance of this, the film could stand to be less partisan and more even-handed in tone, especially when it comes to balancing its coverage of which states have implemented voter suppression measures, some of which have arisen in some seemingly unlikely jurisdictions beyond those that have surfaced in more readily expected locales. What’s more, “All In” says virtually nothing about what needs to happen even if voter rights are sufficiently protected – ensuring that our elections produce victors who are actually able to do something to get the nation back on track once they’re in office. That could easily be a topic for another film, though one can’t deny this consideration is inherently tied to being able to cast our votes in the first place, and, on this point, the picture is silent. Still, I suppose we have to start somewhere, and preserving the opportunity to help bring about such an outcome is essential if we ever hope to have a chance to attain that larger goal.