‘All Kinds of Love’ 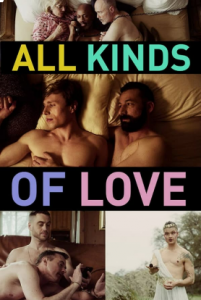 “All Kinds of Love”

Romantic comedies are a pleasant way of spending some time at the movies. However, considering the longstanding nature of this genre, it’s imperative that new entries in this category distinguish themselves by incorporating stories, characters and narrative elements that are fresh, inventive and different. Unfortunately, those are qualities largely missing from this latest offering from writer-director David Lewis. In spite of its impressive production values across the board, this story of a long-tenured gay male couple that, ironically enough, decides to part ways just as the Supreme Court hands down its landmark decision in the Marriage Equality case is about as sappy and predictable as a rom-com can possibly get. To be sure, this release features its share of solid performances, moments of genuinely inspired humor and several modestly intriguing plot twists, but that’s not enough, as much of the film unfolds in a wholly foreseeable fashion, leaving viewers with little to be surprised about. It’s also weighed down by a positively annoying soundtrack that plays like it was plucked from a Hallmark Channel movie. Sensitive viewers should also be cautioned about some extensive and surprisingly explicit sexual content for of picture of this nature. It’s regrettable, though, that the strength of this production’s story didn’t match that of the elements that went into telling it. An empty package is still an empty package, no matter how beautifully it may be wrapped.