‘All Man: The International Male Story’ 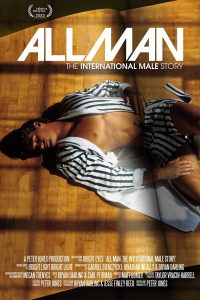 “All Man: The International Male Story”

Who would have thought that a mailorder catalog could become a culture-changing vehicle? So it was with International Male magazine, a veiled catalog of provocative men’s clothing featuring models who epitomized the essence of virility and masculinity. From modest, seat-of-the-pants beginnings in the 1970s, founder Gene Burkard grew the publication not only as an outlet for mailorder clothing sales, but also as source of quiet but undeniable empowerment for young gay men, prompting many closeted individuals to boldly step forward as their true selves and enabling them to embolden their emerging culture. At the same time, IM’s reach extended into American culture at large, encouraging men of all backgrounds – including straight guys – to embrace clothing styles that they may have once never given a second look, making it possible for them to become comfortably fashion-conscious to a greater degree, a social shift that has persisted to this day. The widespread and often-underappreciated impact of this operation has thus been a major influence among American men in numerous ways, a phenomenon now celebrated in this fun, informative documentary from directors Bryan Darling and Jesse Finley Reed. In interviews with Burkard, many of IM’s models and staff, and a number of gay community and fashion industry insiders, along with ample clips from the pages of the catalog, viewers are treated to an in-depth look at the impact and history of the publication, as well as how it reflected and helped shape an evolving culture. There’s considerable eye candy here, too, making for an often-suggestive but eminently tasteful watch. For those interested in learning more about the reach of this influential publication, place your order now.