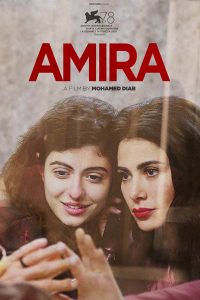 What makes us who we are – our personal character or our immutable DNA? That’s the central question raised in this domestic drama with a sociopolitical twist. When Amira, a 17-year-old Palestinian girl conceived with the smuggled semen of her imprisoned father (an opposition political leader confined by the Israelis), discovers that the man she has always thought of as her dad is not her biological parent, the revelation creates chaos within her immediate and extended family, as well as among his unincarcerated political allies. This becomes most apparent in her search to uncover her true lineage, a process hampered by her uncooperative mother, who thwarts Amira’s efforts at every turn. Writer-director Mohamed Diab’s latest has been unfairly labeled a soap opera and a manipulative melodrama, but these flimsy criticisms ignore the impact of this clandestine practice, one that has been playing out for nearly a decade and has implications extending beyond immediate family units. While it’s true that the somewhat overlong final act is at times a bit overdramatic and occasionally unduly dogmatic, the filmmaker’s sincerity in attempting to portray circumstances that go beyond mere private domestic matters is indeed commendable. All of this is made possible by the fine performances of Tara Abboud, Ali Suliman and Saba Mubarak as the once-happy family members whose lives are suddenly and unexpectedly thrown into turmoil. Pay no attention to the cynical critics about this one; it’s a fine, engaging effort well worth the viewing time.