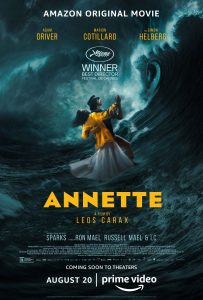 When I watch a movie, I pride myself on sticking it out, no matter how awful it may be. However, when it comes to this cinematic monstrosity, I came perilously close to shutting it off on several occasions – it’s that bad. Director Leos Carax’s overstuffed, overlong, virtually unwatchable operatic tragedy is so full of itself that it tries viewer patience from about 10 minutes in all the way to its much-anticipated conclusion, a welcome outcome that doesn’t arrive for more than two hours. This story of an alleged stand-up comedian (though better characterized as a pathetically enigmatic performance artist) and his celebrated soprano wife who become the proud parents of a gifted marionette sans strings meanders along at a glacial pace and grows ever more ridiculous with each passing frame. The “music” (if one can call it that) consists largely of overly repetitive refrains of utterly mundane “lyrics” backed mostly by melodies consisting of a fusion of Carl Orff, Philip Glass and excerpts from the crowd scenes in “Jesus Christ Superstar.” Then there are the performances, which feature an array of issues, including the self-important, miscast portrayal of Adam Driver, the melodramatic overacting of Simon Helberg and the woeful underutilization of Marion Cotillard. I’ll admit that I applaud the filmmaker’s attempt to try and create something fresh and different, but this ain’t it, and how this mess captured the Cannes Film Festival Award for best director is truly beyond me. Unfortunately, this is the kind of arthouse film that tends to give arthouse movies a bad name. By all means, skip this one at all costs.