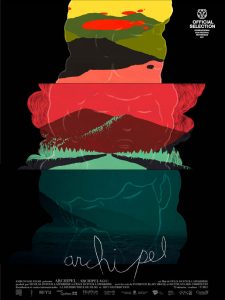 This experimental animated film offering from director Félix Dufour-Laperrière is indeed difficult to categorize. On one hand, it feels like a cinematic meditation, a poetic visual tone poem. On the other hand, it comes across like a metaphysical, metaphorical, surrealistic travelogue to the islands of Quebec’s St. Lawrence River, attempting to draw connections between what has arisen there and those who created it – us. While the visuals certainly work beautifully, the narrative is often scattered, appearing more than a little disjointed and wonky as the film’s river journey to the ocean progresses. Kudos are definitely in order for the French Canadian filmmaker’s attempt at trying to do something different here, but there is something to be said for invoking restraint over free rein, as is more than apparent in the finished product. It’s an ambitious effort that is likely to leave viewers visually dazzled but somewhat perplexed, as every review I have read of this film has interpreted it differently (and often at wide variance from one another). Make of it what you will.