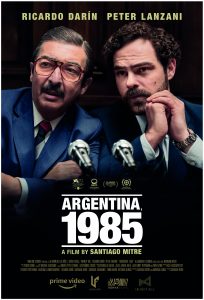 Seeking justice is certainly a noble pursuit, especially when the transgressions calling for it have been particularly egregious. But it can also become a rather precarious undertaking when conducted under conditions that carry potentially serious consequences, such as retribution, vocational ruin and even death threats. So it was in Argentina in the mid 1980s, when the newly restored democratic government sought to prosecute military and civic officials from the previous regime for crimes against humanity, including kidnapping, torture, rape and genocide. These allegations were leveled against authorities who viciously and gratuitously violated their mandates in seeking out possible insurgents, essentially establishing a fascist police state in which suspicions were elevated to a grotesquely exaggerated level, one that was pervasively sadistic and brutal, affected countless individuals, and spanned the entire country for a decade. But the prosecutors appointed to carry out this task were reluctant to take it on given the possible ramifications they could face and the tight time frame under which they would be working. Still, there was justice to be had, and its fulfillment was crucial to fostering a stable future for the new Argentinian republic, especially given the extent of the harm and need for the nation to heal. Writer-director Santiago Mitre’s latest presents a thorough, capably told account of this courageous venture, with a solid screenplay and fine performances that effectively depict the dangers, ironies and nuances involved in this tightrope-like endeavor, as well as the personal impact on its principal figures. The film could stand a little tightening in spots, and some of the background music doesn’t always fit. But, in all, this is an engaging, attention-grabbing project that successfully avoids legal jargon and excessively detailed political considerations while revealing much about one of the most compelling judicial proceedings since Nuremburg, one that, unfortunately, reiterates the same cautionary message to have come out of that landmark event – “Never again.”