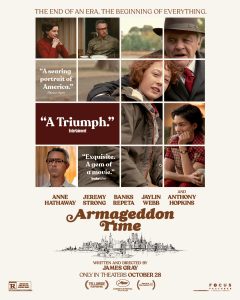 To be perfectly honest, I was at a loss to understand exactly what writer-director James Gray was going for in this coming of age story. Set in New York in 1980, the film follows the exploits of an ill-behaved  Jewish sixth-grader (Banks Repeta) who shows promise as an aspiring artist but operates below his potential, particularly when he engages in largely inexplicable pranks and mischief with his African-American best friend (Jaylin Webb), much to the dismay of his parents (Anne Hathaway, Jeremy Strong). In fact, the only one who seems to be able to connect with the young man is his wise old grandfather (Anthony Hopkins), a relationship that seems implausible given the protagonist’s behavioral track record. But that primary story thread is often muddled by a clumsily handled array of other plotlines and narrative themes related to racial and class privilege, parental abuse and complacency, antisemitism, and a problematic educational system, as well as occasional fantasy sequences. To make matters worse, the camera work is generally far too dark throughout the film, taking its gloomy atmospheric quality to an overwrought, heavy-handed extreme. Collectively, all of these elements are essentially designed to convey the message that “life sometimes isn’t fair” (now there’s a profound revelation for you), one that the filmmaker appears to be trying to tie to the picture’s time frame at the onset of the Reagan Era. This combination makes for a rather disappointing, underwhelming cinematic offering, despite a trailer and marketing materials that appear to promise viewers more. In all fairness, the picture features several fine performances (most notably Hopkins, Hathaway, Webb and a brief walk-on appearance by Jessica Chastain), but the film’s lead is played by a young, largely inexperienced actor who’s simply not up to the part (and is often as annoying to viewers as he is to his character’s parents). That uninspired portrayal undoubtedly is undermined by the film’s meandering screenplay and uneven, often-half-baked character development (as seen by Strong’s scattered father figure performance). Whatever the filmmaker was trying to say in this seriously unfocused tale is, sadly, likely to leave audiences as perplexed as its adolescent protagonist. Indeed, if anybody out there can clarify this for me, please let me know.