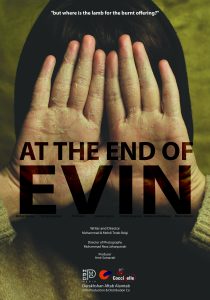 When Amen, a transitioning young Iranian male seeking to surgically complete the gender reassignment process, is introduced to a wealthy, powerful, well-connected sponsor, there is much hope for a new start in life. However, as soon becomes apparent, there are strings attached to this promised arrangement, the answers to which aren’t readily forthcoming and grow ever more cryptic and troubling with the passage of time. What exactly is in store? That’s what this creepy but mesmerizing tale slowly discloses, growing progressively more unnerving with each passing frame, thanks in large part to the film’s inventive cinematography, which tells the story from the perspective of camera as unseen protagonist. In their debut feature, directors Medhi and Mohammad Torab-Beigi present a chilling story whose treatment echoes the chilling treatment that the Iranian transgender community is subjected to on an ongoing basis, leaving viewers with an incensed yet unsettling feeling by film’s end. While the course of some of the dialogue may seem meandering and hard to follow, it’s all part of the well-concealed mystery that’s unfolding before the audience’s eyes, something that becomes more apparent the further viewers get into the story. An auspicious start for a talented emerging directorial duo.