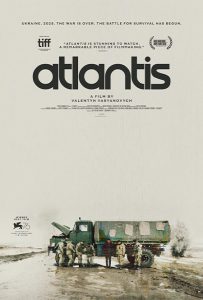 Though singularly artistic in its vision and earnestly noble in its intent, this Ukrainian offering about life in the near future after the end of the country’s protracted conflict with Russia struggles to find its traction, endlessly meandering and relying on far too many pregnant pauses and excessively long, lingering shots to make the film work. This visual attempt at creating a sense of bleak yet profound insight, unfortunately, fails to successfully conceal what is essentially a thin underlying narrative about a troubled former soldier seeking to adjust to life in peacetime in a land that has been morally and environmentally decimated by the conflict. It also doesn’t help that there’s virtually no back story about the protagonist and little information about the war, which may leave many viewers out in the cold as to what they’re watching. What’s more, it’s puzzling that this release has been misleadingly labeled a sci-fi tale when, in fact, it’s more properly characterized as a piece of dystopian political speculation, one that metaphorically seeks to echo the fate of the fabled lost continent. In all, the picture is certainly laudable for its valiant effort at making a weighty statement, but, regrettably, its pacing and overall execution weigh it down, trying viewer patience rather than offering meaningful enlightenment.