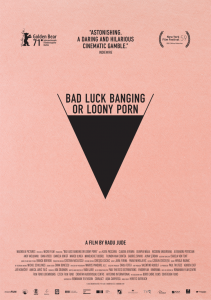 Wow – this one is so out there that it’s almost impossible to know how to describe it, suffice it to say that this bold, courageous Romanian offering from director Radu Jude covers a lot of ground in less than two hours. Told in three parts and an epilogue, the film follows the saga of a school teacher who makes an amateur sex tape with her husband that somehow gets leaked to the internet when the couple’s computer is in the repair shop, creating a scandal that threatens her job and reputation. She comes under tremendous scrutiny from the school and the parents of its students, forcing her to defend herself amidst a flurry of criticism. But, as much of the film shows, that criticism is rooted in a plethora of hypocritical, prejudicial and ignorant attitudes, issues on which the filmmaker shines an incredibly luminous light, both on Romanian nationals and citizens of the world at large. Regrettably, the impact of the director’s satire is a little slow in coming during the film’s first two segments, both of which include some odd camera work and diverse styles of storytelling that don’t mesh well, prompting viewers to wonder what exactly he’s going for here. Thankfully, however, this becomes more than apparent – in all its brilliance and ugliness – in the picture’s bitingly funny third sequence and utterly hilarious coda. This could thus be characterized as an offering that delivers a little too little a little too late, but what a delivery! Had the entire production been as consistently on target as its concluding segment, this would have been quite an insightful eyeful. But, as it stands, this is more of a valiant last-minute rescue effort that’s likely to leave most audience members lamenting “if only….” Sensitive viewers should be aware that this offering contains extremely explicit sexual content and pervasive offensive language, much of it quite laugh-inducing, but certainly nothing that would make for suitable screening at a genteel afternoon garden party. Indeed, who knew that sexuality could be so controversial – or funny.