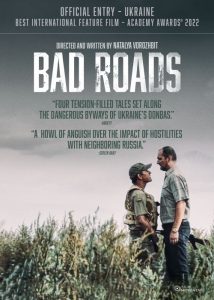 The indignities of war can be horrendous, if not downright repulsive. And, while it’s important that these atrocities are not overlooked, the way in which their stories are told matters greatly. That’s where writer-director Natalya Vorozhbyt’s debut feature regrettably drops the ball. This collection of loosely linked vignettes set during the civil war in the Donbas region of Ukraine shortly after the Maidan Uprising presents a series of stories depicting the physical, psychological and social impact of the conflict on the area’s citizens, much of it in restrained but unflinching detail. The problem, however, rests with the specific material chosen for these vignettes. Of the four narrative threads, the first is the most compelling, credible and engaging, even if it drags somewhat in spots. The remaining three, however, suffer from a variety of issues: the second one is dull and largely pointless, and the fourth is bizarre and at times laughably silly. But the most troubling is the third, which is positively sick, twisted and perverted, even if it manages to keep from becoming overly gratuitous in telling a story that seems to have little to do with the conflict itself and which merely provides the stage for an episode of manipulation porn. What’s more, the film overall does little to shed much light on the war itself, choosing instead to focus on the individual tales for which the conflict serves as little more than a backdrop. Given that this offering was primarily made for a Ukrainian audience, perhaps the filmmaker decided that locals were already familiar enough with the kinds of issues covered here and felt that they didn’t need to be belabored in the movie’s narrative. But, for those on the outside looking in, it feels like there’s a lot of back story missing that doesn’t enhance the individual tales told in the picture’s overarching content. And, as for what’s being shown here, it’s not patently obvious that we really need to see it, no matter how realistic it might be in capturing stories typical of the subject matter upon which they’re based. In these days of the current Ukrainian conflict, it’s natural to want to be supportive of the nation’s people, culture and society in the face of the oppressive circumstances currently prevailing there, but that doesn’t mean everything that comes out of that region should automatically be given a pass because of its source of origin, and that’s certainly the case where this film is concerned.