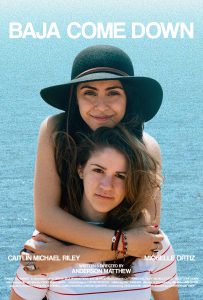 What’s billed as a Baja California road trip tale whose metaphorical purpose is to determine the future of a lesbian relationship that’s on the rocks is, in fact, a long, drawn-out, pretentious slog that plays more like a student film project than a bona fide theatrical release. Director Anderson Matthew’s 78-minute film seems much longer than it actually is, because viewers are more likely to pay more attention to their watches than to what’s happening on screen. Aside from some nice cinematography and a few modestly engaging scenes, this offering does little more than serve up an examination of lesbian relationship dynamics, a scenario that’s been done many times before – and better. It’s particularly difficult to muster up much sympathy for the film’s whiny, indecisive protagonists, whose feelings seem to go back and forth repeatedly, stretching out events toward a conclusion that most everyone is unlikely to care about by the time the end is finally reached. Don’t sign up for this trip – you’ll be glad you stayed home.