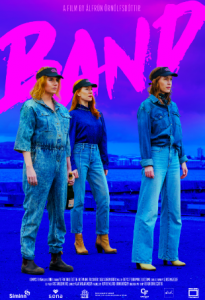 So is this real or real fake? It’s hard to tell when watching this “documentary” about an all-female pop group trying to make it big at middle age with their own style of Björk-esque Icelandic performance art/rock music. Writer-actor-director Álfrún Örnólfsdóttir, one of the would-be aspiring artists, who slips back and forth in front of the camera, tries to chronicle a story where it’s difficult to know where genuine ambition leaves off and bona fide spoof begins, making it difficult for viewers to know what to believe is “real” and what’s made up. That deliberate ambiguity puts this offering in a category by itself, but it’s hard to know when viewers are supposed to laugh or lament. If it’s genuine, it tells a pathetically sad story of a woeful group of performers; if it’s not, it’s an overly silly mockumentary that often tries too hard and wears out its welcome rather quickly. But, as it drones on and on, it’s unlikely anyone is going to care, even by the end of its relatively scant 1:27:00 runtime. Indeed, sometimes trying too hard to prove one’s cleverness proves nothing, as is very much the case here.