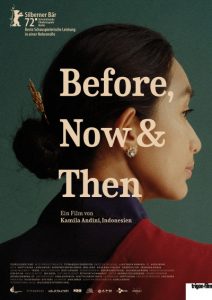 The search of happiness can be an elusive one, especially when confronted by challenges on multiple fronts, even for those who ostensibly appear to be superficially contented and well off. Such is the fate of a seemingly comfortable middle-aged housewife in 1960s Indonesia, whose first husband, a military officer, mysteriously disappeared and whose second spouse, a plantation owner, is having a less-than-veiled affair, all of which is set against the country’s political unrest of the period. It’s a scenario further complicated by her willingness to capitulate to her circumstances and by the secrets she keeps from virtually everyone. Surprisingly, though, when her husband’s mistress moves in with the family, the two strike up an unlikely friendship, one that leads to some difficult but unexpectedly pleasant developments. Writer-director Kamila Andini’s latest feature outing tells a slowly unfolding but ever captivating tale with surprises awaiting around every corner. The deeply heartfelt performances of Happy Salma and Laura Basuki reach out and grab viewers throughout, portrayals all the more enlivened by the film’s mesmerizing soundtrack, gorgeous cinematography and inventive, revelatory surreal dream sequences. Admittedly, the pacing at times could be a little more up-tempo, but this is a small price to pay for an otherwise thoroughly engaging watch, one of the Chicago Film Festival’s surprise charmers.