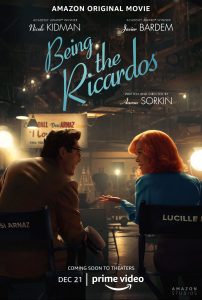 Who would have thought that it would be possible to make the cast of I Love Lucy boring, but writer-director Aaron Sorkin has found a way to do it here. This inside look at a week of production of the legendary sitcom, as well as the lives of its two principal stars, Lucille Ball and Desi Arnaz, is woefully unfocused, both in terms of what it’s trying to say and the chronology in telling it. Worse, however, is the fact that there’s not a lot here that’s especially interesting or overly revelatory. But perhaps the biggest issue with this production is the casting of Nicole Kidman as the iconic Lucy, turning in a mugging, self-conscious performance where viewers are not watching “Lucille Ball” but “Nicole Kidman as Lucille Ball.” That’s unfortunate, given the commendable portrayal of Javier Bardem as Desi Arnaz, effectively showcasing the actor-producer’s often-underappreciated efforts as the brains behind this operation, one that changed television history forever (even if one wouldn’t necessarily get that from watching this film). It’s often said in Hollywood that it’s unwise to attempt to remake the classics – or, in this case, to even attempt to re-create them.