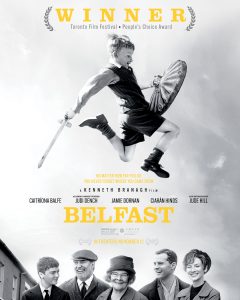 While writer-director Kenneth Branagh’s latest offering might not always feel as fully fleshed out as it could have been, for what’s here, this semi-autobiographical memoir about the filmmaker’s challenged upbringing in this troubled Northern Ireland city hits all of the right notes and does so in a thoughtful, entertaining, well-balanced manner. The film, which comes across like a fusion of director John Boorman’s “Hope and Glory” (1987) and the nostalgic TV series The Wonder Years, tells the story of a sprightly young lad attempting to grow up as normally as possible in the face of a senseless religious-based civil war that began in 1969, one in which a once-peaceful, harmonious working class community is torn apart by forces that have no business intruding on the lives of good people trying to lead productive and cheerful lives. Told from the perspective of its youthful protagonist, “Belfast” plumbs material that many viewers can easily relate to – family dynamics, first loves, the joy of community and the endearment of adoring grandparents. Admittedly, there are times when viewers are left somewhat wanting for a little more dramatic depth, but the finely penned screenplay nevertheless delivers more than its share of emotionally touching moments and gentle humor, as well as evenly paced, well-developed treatment of its various story threads, all of which are suitably wrapped up by film’s end. All of this is beautifully brought to life by the picture’s superb black-and-white cinematography, its lively and fitting Van Morrison soundtrack, its skillful, sensitive direction, and the excellent performances of its fine ensemble cast, particularly newcomer Jude Hill, Irish actress Caitríona Balfe, and veterans Judi Dench and Ciarán Hinds. It may be tempting to label this a feel-good movie, but that’s too glib considering the backdrop under which the story takes place, one that gives the picture an edge and serves as a constant reminder of what can lurk in the underbelly of our reality no matter how otherwise pleasant our existence may seem.