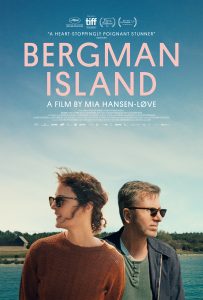 Director Mia Hansen-Løve’s tribute to the life and work of the late Swedish auteur Ingmar Bergman is certainly reverential, if not a bit gushing at times. With its travelogue survey of Fårö Island, the Baltic Sea location where the filmmaker spent much of his time creating some of his most acclaimed works, viewers are let in on more tidbits of Bergmaniana than anyone other than his most diehard fans would probably care to know. Ordinarily, that might provide sufficient makings for a film in itself, but that story thread is essentially only one of three movies within one picture. The others begin with the creative pilgrimage of a husband and wife team of American filmmakers who, like many others, travel to the storied island to find the Bergman-esque inspiration to develop their respective movie projects. Once there, the narrative spins off on another track for one of those filmmakers, as she becomes so enrapt in the realization of her project that the lines between reality and fiction begin to blur. Seemingly bona fide bleed-throughs of her emerging production begin appearing in her everyday life (and vice versa), resulting in the very kind of surreal ambiguity that characterized many of Bergman’s releases. It would seem that this dual-tracked homage to the filmmaker is yet another component of this respectful tribute. Unfortunately, these two story lines aren’t handled with the same degree of deft skill as that wielded by the director this production is seeking to honor, coming across as more haphazard and random than deliberately planned. The result is an often-confusing offering, one that struggles to reach for more than the director of this project is realistically capable of pulling off. That’s regrettable, too, given the superb cast (especially Tim Roth, Vicky Krieps and Mia Wasikowska) and beautiful location that are included in this film. I also have to wonder who this film was really made for, since it requires a fairly thorough knowledge of Bergman to fully appreciate many of the picture’s nuances, something that only devout cinephiles are likely to grasp (and that many younger viewers may be largely or wholly unaware of). It’s indeed noble to want to pay a fitting tribute to one of one’s role models, but it’s not something that one wants to get wrong in the process of paying homage; that’s more of a disappointing letdown than an attempt at showing one’s respect.