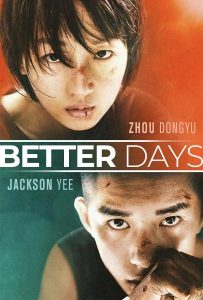 As a treatise on the damage and indignities caused by bullying (both physically and in cyberspace), the message here couldn’t be any louder or clearer. But, as a cinematic work, director Kwok Cheung Tsang’s latest offering could use some tidying up, especially in terms of length. Based on author Jiuyue Xi’s young adult novel In His Youth, In Her Beauty, this somewhat overlong story of a Chinese schoolgirl beset by relentless (and graphically depicted) bullying as she prepares for her college entrance exams takes its time telling its tale. However, the picture grows decidedly stronger as it progresses, delivering a number of intriguing twists and turns as the protagonist and her punkish but chivalrous protector become embroiled in a gruesome murder mystery. In the end, the picture is a telling indictment of a system that claims to care about the well-being of its school age youth but that ultimately fails to provide the proper protection when needed – that is, until enough attention is focused on the issue that it can’t help but spark much-needed reforms, a potent cautionary tale for us all.