‘Beyond the Infinite Two Minutes’ (‘Droste no hate de bokura’) 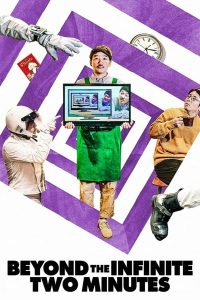 “Beyond the Infinite Two Minutes” (“Droste no hate de bokura”)

Imagine what it might be like to look into a TV screen and see into the future. Granted it’s only two minutes, but, when those who stumble onto this remarkable technology figure out how to manipulate it to extend that time window, all kinds of exciting possibilities surface. Unfortunately, more than a few unexpected hiccups occur, too, some with potentially dire consequences. Such is the scenario presented to an overwhelmed café owner/musician, his staff, his friends and a would-be romantic interest in this wacky Japanese sci-fi comedy. Filmmaker Junta Yamaguchi’s one-shot direction of writer Makoto Ueda’s cleverly penned screenplay is loaded with laughs, even if the script becomes somewhat repetitive at times as the basic premise of the narrative needs to be recapped for new characters each time they’re introduced in the storyline. However, the manic level of humor here is infectious in ways that only Japanese cinema seems to be able to pull off, tickling viewers’ funny bones in virtual perpetuity. You’ll never look at time – or TV – in the same way ever again.