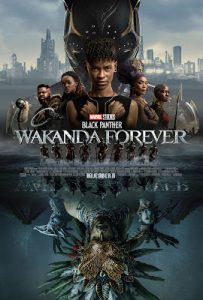 At the risk of overstatement, it’s hard not to be blown away by writer-director Ryan Coogler’s “Black Panther: Wakanda Forever.” This is a vast improvement over its predecessor offering (2018), if not the best picture to ever come out of the Marvel Universe. It’s the kind of film that shows comic book movies can indeed go beyond action sequences and endless explosions to offer viewers something more meaningful and substantial, a result capable of silencing critics like filmmaker Martin Scorsese, who blanketly contend that these releases are without artistic merit. What’s more, this second outing in the franchise has undoubtedly saved it from oblivion after losing its lead character in the wake of its initial outing with the untimely death of protagonist Chadwick Boseman. In addition to telling a compelling story, this film provides a credible bridge to the future while fittingly serving as a respectful tribute to its fallen star, one that honors the actor in a way that the movie industry unfortunately never did. Its tactful, reverential treatment of this issue is sure to evoke an emotional response, if not a few tears, in a truly loving but not maudlin way. Beyond that, the narrative and character development in this installment are also a significant cut above the original, telling a more engaging story with deftly nuanced themes that make its predecessor look comparatively simple. It also features fine performances by its ensemble cast, particularly Letitia Wright, Lupita Nyong’o, Danai Gurira, and, most notably, Angela Bassett in a genuinely Oscar-worthy portrayal. But what’s most impressive is the film’s handling of its principal themes, delving into concepts that action-adventure offerings rarely, if ever, do, and certainly not as capably addressed as here (making pictures like “The Woman King” appear somewhat amateurish by comparison). To be sure, there are a few elements that might have been handled better (the picture is a little too long, it underutilizes the talents of Winston Duke, and there are a few too many James Cameron-esque graphic and cinematic attributes reminiscent of “Avatar” (2009) and “The Abyss” (1989)), but these are minor shortcomings in comparison to everything else the picture has to offer. Of course, it’s impossible to talk about this release without noting that it probably wouldn’t have the same onscreen impact were it not for the tragic offscreen story that has sadly accompanied it, though the filmmakers truly deserve praise for their sensitive handling of this matter without giving in to cheap exploitation or sensationalism, results that may very well not have occurred in lesser-skilled hands. It’s truly comforting to see that the “Black Panther” franchise has managed to weather this storm and to do so as well as it has. Wakanda Forever indeed.