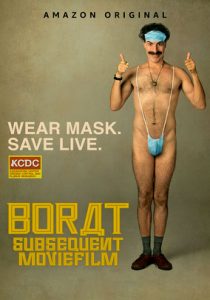 The outrageous, in-your-face, unexpected shock value humor that characterized this film’s 2006 predecessor never really impressed me much, and that’s largely true here, too. However, this long-awaited sequel has its moments of inspired comedic tastelessness that make the picture something of a modest guilty pleasure, the kind of movie that you watch in private, under the covers in your bedroom, lit up by the glow of your portable video device. Some of the novelty is gone now that audiences know the formula that makes the production work, and the audacity that fueled its predecessor somehow doesn’t seem quite as comically appalling (or appealing) in an age where we have pervasive social media posts whose sentiments are even more cutting (and cynically vile) than the content presented here. But, when Sacha Baron Cohen and company hit on an inventive gag that works, it really works, in some cases generating laughs even heartier than those that came out of the first film. The biggest gem here is the addition of Maria Bakalova as the protagonist’s teenage daughter, who provides some much-needed oomph to the overall tone of the film, delivering a hilarious performance deserving of all the accolades and award nominations she has received. Still, given the state of culture and society these days, it may be time to put the Borat franchise to rest; we don’t need any more fuel splashed on the fire, no matter how well-intentioned it might be as biting political commentary – we have enough of that already, and it’s not very funny any more.