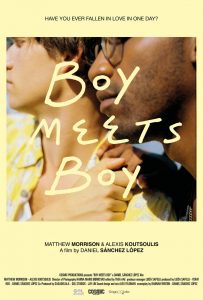 More aptly titled “Bore Meets Bore,” everyone knows where this one is ultimately headed, yet it tries desperately to make itself out to be more than it really is. As a cross between a chance meeting/gay whirlwind romance and the “Before Sunrise”/”Before Sunset” filmography (with bits of “My Dinner with Andre” thrown in), director Daniel Sánchez López’s talkfest between two gay men who meet on a nightclub dance floor and spend the following day on a walking tour of Berlin is merely a hedge that puts off the inevitable hook-up between the two ships in the night (or day, if you prefer). The picture tries hard to convince viewers that the protagonists are falling in love, but there’s precious little indication of that in light of the general lack of chemistry between them, with much of their dialogue consisting of cheeky flirting and pretentiously “deep conversation.” Given the destination that’s visible from miles away, the discourse that precedes it adds nothing to the film other than lubrication for the gears that are grinding away for almost an hour before the participants finally decide to get down to the business that everyone knows they’re headed for.  And, while the sex is tastefully and sensitively filmed, this is really little more than very, very soft core erotica dressed up as art, much in the tradition of the “Emmanuelle” movies. Yawn city on all fronts, to be sure.