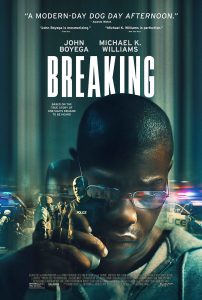 Justice ignored is indeed justice denied. What’s more, it’s an open invitation to things easily getting out of hand as the tension behind this is dialed up to an exaggerated level. That’s precisely what happens in this taut, fact-based drama about Iraq War veteran Brian Brown-Easley (John Boyega), whose VA disability benefits got lost in the bureaucracy and left him homeless and desperate – so much so that he took drastic measures to inform the public about his situation and that of many of his peers. Director Abi Damaris Corbin’s second feature outing (f/k/a “892”), reminiscent of the classic epic “Dog Day Afternoon” (1975), is a riveting, albeit disturbing, watch from start to finish, casting a long shadow of shame on those who lack the decency and humanity to care for those who made the effort to care for us. The picture’s stellar ensemble cast, which captured the 2022 Sundance Film Festival Award in this category, is superb across the board, featuring the best portrayal ever turned in by Boyega (who has come a long way from his “Star Wars” outings) and an excellent performance by the late Michael K. Williams in one of his final roles. This Sundance Dramatic Grand Jury Prize nominee is by no means an easy film to screen, but it’s one that anyone interested in seeing justice served should watch – and take action about to see that it’s not denied again.