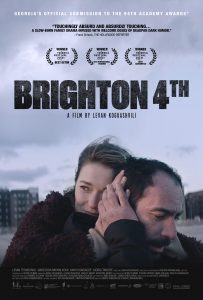 How far can one’s sense of compassion and helpfulness extend? That’s what director Levan Koguashvili’s third narrative feature explores in this heart-tugging comedy-drama about an aging Georgian wrestler who travels from his homeland to New York’s Brighton Beach neighborhood to help his son resolve a sizable gambling debt. The veteran grappler settles in at a boarding house run by his sister-in-law, where he meets a host of colorful characters and becomes involved in helping many of his fellow immigrants resolve various thorny issues of their own. The film thus paints a portrait of a Samaritan who’s always looking to help make things right for others, no matter what it takes, employing everything from “polite” physical intimidation to telling “good lies” to assuage tender feelings, even if his efforts mean having to exert himself in the process. The result is a touching tale that stirs an array of viewer emotions. While the narrative tends to meander somewhat at times, the pieces that make up this story nevertheless collectively depict a close-knit community in which individuals generally support one another through thick and thin and still rely on such traditional conventions as good faith and personal honor, even in dealings of a shady nature. We can learn a lot from that in a day and age when such values have come to be seen as outmoded and sentimentally quaint, a lesson that can help us wrestle with life’s challenges while maintaining an honorable sense of dignity and decency.