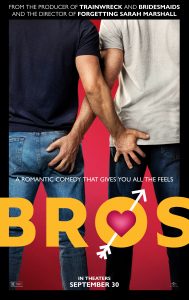 Who knows why relationships work or fail? That’s especially true when it comes to gay male partnerships, which often come and go like the wind and whose permanence or fleeting nature frequently rests on the unlikeliest of considerations. But sometimes they somehow manage to survive, despite their conundrums, quirkiness and seemingly deceptive dysfunctionality. Such is the case in director Nicholas Stoller’s brilliant new romantic comedy about a pair of apparently mismatched partners who wade their way through the murky, uncharted waters of same-sex romance, a sort of gay male version of “Annie Hall” (1977). In some ways, this picture employs an adapted version of a rather tried-and-true formula of boy-gets-boy/boy-loses-boy/boy-gets-boy-back-after-a-series-of-extracurricular-flings, an approach that has earned the film its share of criticism. However, given the ways in which that basic narrative is dressed up with snappy, often-hilarious writing, ample situational and sight gags, and just the right amount of heart-tugging, inspirational drama (without becoming schmaltzy or overly preachy), the picture generally succeeds across the board. Virtually all of the humor is positively spot-on, and it’s served up in an easily relatable way such that one need not be a card-carrying member of the LGBTQ+ community to grasp the jokes. The film also features an array of appearances by gay and gay-friendly icons like Harvey Fierstein, Debra Messing and Kristin Chenoweth, a variety of cameo appearances by big name Hollywood stars, and a host of gay, lesbian, bisexual and transgender performers. It’s also worth noting that the film’s principal producer/distributor, Universal Pictures, deserves a hearty round of applause for taking a chance on material like this. Indeed, the backing of a romantic comedy involving alternative lifestyles by a mainstream studio is truly groundbreaking in the movie industry, and, considering the critical success that this release has already garnered, this savvy move by a major player opens the door to greenlighting future projects of a similar nature, a rich vein of material that’s just waiting to be mined and finally has a shot of making it to the big screen. Sensitive viewers should be aware that there is some explicit sexual content in this release, but, considering the comic nature of much of it, it’s hard to envision not evoking laughs from even the most conservative audience members. Given how well this offering succeeds on so many fronts, it would be a shame if it were to be overlooked come awards season, especially when it comes to its writing. It’s refreshing to see a film that finally knocks it out of the park this year – and this truly is the one to have done it.