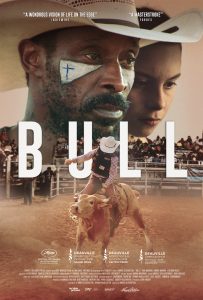 What starts out with much promise unfortunately loses its way in the final act with far too many underdeveloped and unresolved story threads. This tale of a wayward teen who starts finding her way in life under the reluctant mentorship of her crusty neighbor, a onetime rodeo bull rider beset by borderline addiction issues and chronic health problems, veers off in too many directions that one hopes will eventually come together but don’t. While director Annie Silverstein’s refreshingly unconventional approach frequently defies expectation in many entertaining and enlightening ways, the filmmaker frequently doesn’t seem to know what to do with these developments once she introduces them, especially in the area of character development. Thus the powerful and intriguing setup that emerges in the first two acts is regrettably squandered in the home stretch as the narrative fails to coalesce in a cohesive and impactful way. To the film’s credit, Rob Bowman’s outstanding lead performance as the aging former rodeo star helps to hold things together well, but even that is ultimately not enough to save this aspiring but wanting debut feature.