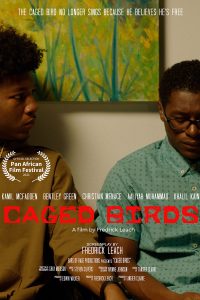 It’s unfortunate when a film has a lot to say but ends up doing so poorly. Such is the case with director Fredrick Leach’s debut feature, which tells the story of an intelligent but geeky suburban African-American high school student tormented by a White bully and a wrong-headed attempt at revenge for those acts that goes terribly wrong. To its credit, the picture serves up ample commentary about such important subjects as gun violence, racial profiling, unbridled prejudice, bullying, unjust prosecution and incarceration, and a host of other social ills. However, the release suffers from an array of filmmaking missteps, including bad acting, poor casting, lackluster writing, clichéd tropes and implausible character development. In fact, the film’s failings on these points are so egregious that they unintentionally become laughable, undermining virtually everything of value that the picture has to offer. “Caged Birds” may have started down the right path, but it made far too many wrong turns along the way to give it the credibility needed to be taken seriously.