Skip to content
Home/‘Calm with Horses’ (‘The Shadow of Violence’)

‘Calm with Horses’ (‘The Shadow of Violence’) 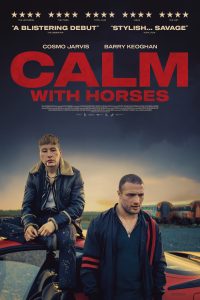 “Calm with Horses” (“The Shadow of Violence”)

Originally titled “Calm with Horses,” this gritty drama with a soft underbelly capably tells the story of a former boxer-turned-enforcer for an Irish crime family whose loyalty gets tested when he’s assigned a particularly gruesome task, all while he attempts to reconcile with his estranged wife and autistic son. Director Nick Rowland’s debut feature serves up a familiar story with a number of intriguing twists that provide an interesting vehicle for its multidimensional characters, roles that give the picture’s excellent ensemble cast much to work with, especially protagonist Cosmo Jarvis and sinister sidekick Barry Keoghan. The picture drags a bit in a few spots, and the actors’ thick accents sometimes challenge the viewer’s audio comprehension capabilities, but there’s much to like in this otherwise-fine offering, recipient of four 2021 BAFTA nominations. In fact, I liked just about everything about this film except its title(s), neither of which suit it particularly well. But, as with a good book, if the content captivates, who cares what the cover looks like? (apologies to the excellent cover designer of my three books!).