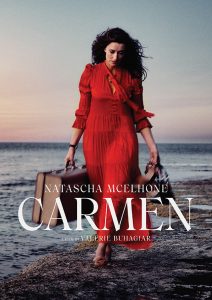 When the priest of a small Maltese parish dies, his longtime caretaker and housekeeper (his younger, now-spinsterly sister) finds herself without living or working arrangements. What is she to do to support herself? Such is the lot of Carmen, the title character of this slightly whimsical but vastly underdeveloped, allegedly fact-based tale of a woman seeking to discover and reinvent herself at middle age. Writer-director Valerie Buhagiar’s latest tries to keep its story light and bouncy, but it often does so without much direction, purpose or follow-through with regard to the various disconnected incidents that arise. It’s almost as if the picture is trying to get by on a bucket full of charm and the frequent employment of synchronicities, many of which are supposed to seem meaningful but often go without explanation. The result is a largely pointless exercise in trying to tell a tale that should be full of warmth, fun, lightheartedness and redemption. It’s also a missed opportunity to showcase the talent of Natascha McElhone in what should have been one of her best performances in years. But, as it plays now, “Carmen” is, regrettably, more like an inside joke that most of us are being left out of.