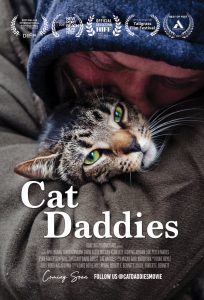 Director Mye Hoang’s adorable documentary about our furry feline friends is the kind of movie that will undeniably have viewers going “awwwwwwwwwwwww!” at least once every five minutes. This affectionate tribute to the cats of the world, as told through the stories of their adoring male owners, showcases the genuine unconditional love they reciprocally hold for one another. With tales ranging from a cat-loving actor to a truck driver who criss-crosses the country with his fuzzy four-legged companion to a homeless New York construction worker who rescued a kitten and made a friend for life, among others, the film can’t help but lift our spirits and fill us with an abundance of warmth, tenderness and goodwill. Perhaps the only fault I could find with this offering was its premise that it’s now supposedly become acceptable for big, strong, macho men to enjoy the company of their feline friends, an idea once seen as an indication of questionable masculinity. However, I find the need to express this allegedly revelatory notion as itself inherently archaic; after all, real men have been eating quiche and enjoying the companionship of cats for quite a long time now, and trying to claim that this is a “new” idea is outdated, something that could have easily been relegated to a footnote or passing reference (one need only look back to the examples set in movies like “Harry and Tonto” (1974) to see that this idea is anything but new). That aside, however, this is a delightful watch that will surely have you purring by film’s end.