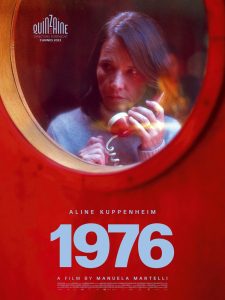 What should have been a tense, claustrophobic look at life in 1976 Chile shortly after the overthrow of the democratically elected Allende administration and the imposition of the hard-line Pinochet regime is, unfortunately, a watered-down, meandering, unfocused tale that never fully attains its goal. Writer-director Manuela Martelli’s story of a middle-aged doctor’s wife who risks her own safety to care for a wounded insurgent in hiding never really catches traction, filling its narrative with endless, unexplained, underdeveloped plot incidents and a woeful lack of character development, including that of the protagonist, whose motivations are never adequately explained but merely hinted at with such subtlety as to be virtually meaningless. By the time viewers reach the film’s end, they’re more left with an unsatisfying “Oh” rather than a throat-clutching “a ha!” A true disappointment given the subject matter this production had to work with.