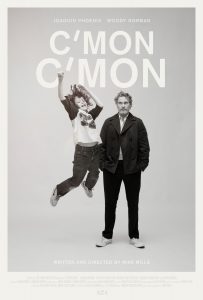 “C’mon C’mon” is certainly an apt title for this offering – it’s what I kept saying to myself throughout much of this directionless exercise in pretentious contrivance, my leg progressively tiring of being pulled from the lack of credible believability. Director Mike Mills’s latest exploration of “feelings!” is so overwrought that I lost interest quickly; in fact, I started checking my watch about 25 minutes into it and found myself doing so frequently thereafter. This is yet another film featuring the scenario of a quirky, uber-sensitive, ultra-perceptive kid who simultaneously claims to not understand the world around him while somehow also having an uncanny grasp of it, surrounded by adults who are fundamentally even more clueless than he is despite their pontifications about the latest in indulgent child-rearing techniques. The over-the-top coddling afforded the child annoyingly comes across like a time-out on steroids, even going so far as to have the parental figures seemingly always apologizing to the youngster for their shortcomings. I’m by no means opposed to giving children their say and the need for adults to make up for their faults toward them when necessary, but this one got on my nerves early and often in its slow-motion stroll to the finish line. To its credit, the picture’s black-and-white cinematography is gorgeous, and the film features a fine supporting performance by Gaby Hoffmann. But the choice of Joaquin Phoenix for the lead role is a prime example of miscasting, and Woody Norman as his pint-sized sidekick pervasively got under my skin. Those who are lavishing praise on this one are in desperate need of reality check, not unlike the characters in this narrative and the crew that made the film.