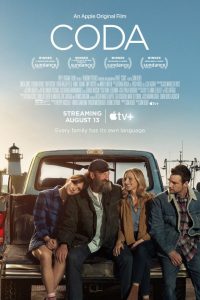 “CODA,” an acronym for “Child Of Deaf Adults,” is the kind of film that’s designed to make viewers feel bad if they speak ill of it. However, after screening it, I can’t help but say that this manipulative, cloying, cliché-ridden, saccharin-encrusted offering lives up to every one of those guilt-inducing traps. Writer-director Siân Heder’s second feature outing tells the story of a Gloucester, Massachusetts high school senior who’s the only hearing member in a family of otherwise-deaf individuals. She’s torn between pursuing her passion for singing and staying with her parents and brother to help them sort out the family’s troubled fishing business. At its heart, it’s narrative terrain that’s been covered a number of times before, albeit with different particulars. That in itself would be fine if it weren’t for the trite way in which the material is presented here, a production laden with the aforementioned calculated, derivative qualities that make it ordinary instead of outstanding. The picture also suffers from a screenplay and direction riddled with inconsistent character development, left-field plot twists, underdeveloped story threads and over-the-top quirks, making this an often-frustrating watch. Admittedly, the film has some genuinely heartwarming moments, such as a number of heart-to-heart conversations between the protagonist and her family members, as well as fine performances by Emilia Jones and Marlee Matlin, but those attributes are hardly enough to give this one a ringing endorsement. This might not be an awful film, but its premise certainly lends itself to a more engaging treatment than is present here.