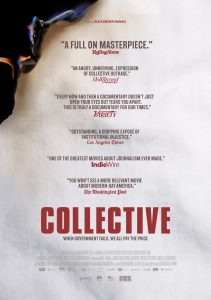 When a tragic 2015 fire in Bucharest’s Colectiv nightclub killed 64 and injured 143, with 37 of the victims dying after the fact, primarily from hospital infections, the event launched a sweeping investigation into the Romanian health care system. This revelation, which was brought to light by a team of reporters from a daily sports journal of all things, led to the dissolution of the government and a probing look into the nation’s hospital network, exposing system-wide corruption that had been in place long before the catalytic event that spurred this inquiry. “Collective” relates the unfolding of these events through unprecedented access to the journalists and reformers who sought to expose a system where patient care was secondary to the self-serving interests of politically connected administrators and their crooked affiliates. However, while director Alexander Nanau’s impressive and authentic documentary is indeed a remarkable piece of investigative journalism, its raw footage approach to the presentation of its material is often dry and talky, failing to stoke the kind of outraged emotional response that a work like this should handily accomplish. It thus plays more like a radio report on film than an engaging cinematic presentation, diluting much of the impact that its findings should generate. Sadly, the victims of this tragedy truly deserve more, not only from the government that let them down, but also from the vehicle through which their story was told.