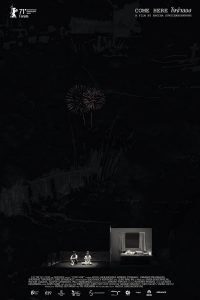 I’m all for cinematic experimentation in the movies. But I draw the line at productions that play like self-indulgent film school projects made by students who assemble montages of their friends engaged in mundane pursuits that they then try to pass off as sublime art. So it is with director Anocha Suwichakompong’s third narrative feature about a group of stage actors vacationing in western Thailand. When they’re not sight-seeing or rehearsing scenes for a play, they engage in utterly inconsequential conversations and pose for protracted (and I do mean protracted) silent close-ups. These segments are intercut with images of bookstores, people sleeping, hydroelectric plants, trains and archive footage of a now-closed zoo. But all of this is to what end? Some say it’s a dream. Others contend it’s a visual tone poem. For me, it’s one giant WTF, but, frankly, your guess here would be as good as mine. While the film is admittedly beautifully filmed in black and white, it moves by at a snail’s pace, the kind of picture that makes one long for a fast forward button. In fact, one could probably get up to use the restroom and come back 20 minutes later having not missed anything. I implore you not to waste your time on this one, because it’s an hour and ten minutes you’ll never get back.