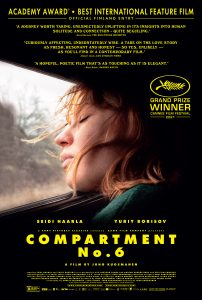 I’ll be blunt about this one – I just didn’t get it, and I don’t know what the fuss is all about. Director Juho Kuosmanen’s third feature tells the story of young Finnish archaeology student who travels from Moscow to Murmansk to see a collection of fabled Russian petroglyphs after being unceremoniously ditched by her girlfriend, a tale that meanders more than the tracks of the train on which she travels. To a great degree that’s precipitated by the implausible “relationship” that slowly simmers between the protagonist and the drunken, lecherous, oversexed traveling companion who shares her train compartment, a working class lout who, when he’s not excessively imbibing in anything alcoholic, engages in various forms of threatening and sexually aggressive behavior. (And we’re supposed to believe that she’s legitimately developing an attraction to someone like that? Yeah, sure.) And this is just the first of many illogical plot devices that pepper a narrative that increasingly lacks believability the further one gets into the film, including elements that unfold on its endless train trip and upon arrival in Murmansk, where yet another set of wholly unlikely events emerges. I didn’t buy any of it, not for a minute, and I don’t understand how others could, either. This one goes off the rails early on and never manages to get back on track, and, by movie’s end, I’d be hard-pressed to understand why anyone would care anyway.