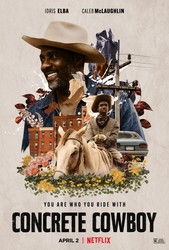 While Philadelphia’s Black urban cowboy community might make an interesting topic for a documentary, in director Ricky Staub’s debut feature, it’s been relegated to a backdrop for a meandering yet predictable estranged father/at-risk teenage son tale riddled with clichés and occasionally preposterous narrative twists. The film’s poorly penned script, with too much emphasis on some segments and not enough on others, is perhaps the biggest problem with this production, aided by little in the way of back story and character development. The performances, including those turned in by riders from the cowboy community itself, are generally capable, though there’s not nearly enough of Idris Elba as the estranged dad in a clearly underdeveloped role. This one is easily forgettable for a variety of reasons, which is unfortunate in light of the picture’s potential-filled subject matter.