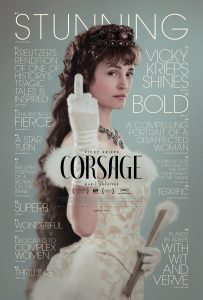 An old saying wisely maintains “Don’t believe everything you read in the newspapers.” It’s an expression aptly accompanied by a contemporary counterpart that says “Don’t believe everything you see in the movies.” That’s especially true for historical biopics, such as this fictionalized account of a year in the life of Empress Elisbeth of Austria (1837-1898), who also doubled as Queen of Hungary, a film that incorporates events that are complete and total fabrications. While writer-director Marie Kreutzer makes no attempt to conceal the fictitious nature of this picture, the fusion of elements that faithfully reflect the character of the real-life figure with this movie’s outright tall tales seriously muddies the waters, creating a mélange of misinformation that many viewers (especially those unfamiliar with the life of the protagonist) are nevertheless likely to interpret as gospel truth. On top of that, the film clumsily mixes Nineteenth Century elements with Twentieth Century influences, particularly in the soundtrack (I’m sure Empress Elisabeth was a big fan of the Rolling Stones’ As Tears Go By). While the narrative sincerely aims to spotlight the severe restrictions placed on women of the era (symbolized here by the compulsive fashion requirement of wearing a corset (or a “corsage,” as they say in German)), that point is often undercut by the liberties the story takes when it comes to portraying the events and culture of the time. Also, in its attempt to present a detailed character study about the often-restless, unpredictable monarch, the film tries to tackle too many of the empress’s eccentricities, personal attributes and social outlooks, frequently yielding a meandering storyline that jumps around far too much for its own good. These thematic ambitions could have just as easily been addressed by playing it straight rather than veering off into fabricated fantasies and needless truth stretching, deviations that undermine the legitimacy of the picture’s intents. To its credit, the period piece production values are exquisite, and the film provides an excellent showcase for Vicky Krieps in the lead role. But there are so many other aspects of this release that are just plain “off” that it’s difficult to recommend it as anything that should be taken seriously, a disappointment in light of the underlying heartfelt statement that it’s attempting to make.