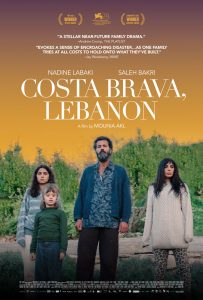 With society collapsing around us financially, ethically and environmentally, there may be a strong desire among some of us to escape these conditions, finding hope, health and happiness in an idyllic sanctuary free of negative influences and built on principles of fairness, freedom and sustainability. But is such an idealistic exodus truly realistic, especially when the world’s ills suddenly intrude upon such a utopia? And how will such an imposition affect those well-meaning social refugees? Those are the questions raised in director Mounia Akl’s second feature, a domestic/ecological drama about a Beirut family that seeks to get away from it all by settling in a rural Lebanese mountain hideaway of their own creation, a locale that seems blissfully perfect – that is, until the government begins constructing a supposedly green landfill on their doorstep. Set in the near future but based on Lebanon’s 2015 sudden and acute trash disposal crisis, the nation’s leadership is challenged with solving its uncontrolled garbage problem and believes it’s found a remedy in the creation of this facility, far removed from much of the country’s increasingly angry urban population. It’s a prime example of an “out of sight, out of mind” solution, one wherein environmental guidelines are easily ignored and seen as having minimal impact – save for the site’s neighbors. The landfill quickly becomes a huge nightmare for the family, but it also exposes cracks in the foundation of their living arrangement, developments that began brewing long before the construction of the new facility. Thus long-simmering weaknesses in the links binding this intrepid band of idealists begin to emerge, placing their future together in escalating jeopardy. The parallels between what’s going on in the household and what’s happening next door are indeed intriguing, though they’re sometimes so subtle that they feel decidedly underdeveloped and not entirely clear, particularly in the picture’s occasional satirical and surrealistic sequences. Nevertheless, the filmmaker’s attempt to serve up a distinctly different type of story with sublimely engaging psychological and sociological aspects makes for a noteworthy cinematic experiment, one that will likely appeal to those with eclectic sensibilities. And who said trash couldn’t be interesting?