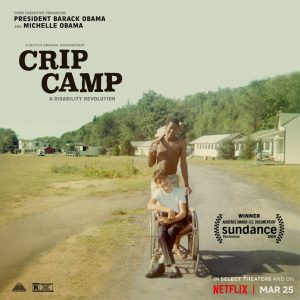 When the 1960s civil rights movement got into high gear, one constituency seeking equality felt left out — disabled Americans. But they were not to be denied, and they began finding their voice through a summer camp in the Catskills designed to enable them to experience the feelings of mainstream living. Drawing upon their time here, they would later adapt the lessons learned to push for the equal rights that would eventually become embodied in the Americans with Disabilities Act, an initiative that would go on to have implications internationally. Through a wealth of archive footage and interviews with camp residents and counselors (many of whom were hippies and minorities, themselves seekers of reform and equal rights), directors James Lebrecht and Nicole Newnham tell this little-known story in a revealing and often quite surprising documentary, filled with an array of moments ranging from touching to heartbreaking to inspiring and even hilarious. However, for all its strengths, the film is not without its shortcomings, such as not enough linkage between camp life experience and the legacy it inspired, as well as some less-than-ideal selections of archive footage that seem more incidental than enlightening, material that could have easily been cut. Still, it’s indeed captivating to see what can emerge out of humble (and seemingly unrelated) beginnings, the film’s greatest asset of all.