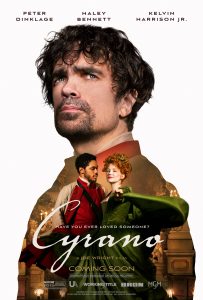 Conveying feelings of true love accurately and believably is a tall order, to be sure, and director Joe Wright’s musical adaptation of the stage classic Cyrano de Bergerac sometimes misses the mark. However, this lavish period piece production hits the target more often than it doesn’t, providing diehard romantics with a generally satisfying movie outing when it comes to exploring the themes of longing and unrequited love. The unfairly criticized musical numbers add a light, airy touch to this story, and, even though they may not be the most memorable compositions in the history of this genre (what musicals these days are?), they’re certainly inoffensive and enjoyable enough to merit their inclusion. What’s most gratifying about this picture, however, is its fine cast with admirable performances by Haley Bennett, Kelvin Harrison Jr., Ben Mendelsohn and, most notably, Peter Dinklage, who absolutely steals the show. “Cyrano” may not qualify as great cinema, but it’s fun, heartrending and easy on the eyes, and there’s nothing wrong with a film that can successfully pull that off.