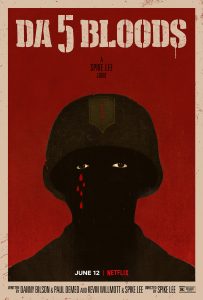 Though far from perfect, filmmaker Spike Lee’s “Da 5 Bloods” is arguably his best offering since “Malcolm X” (1992), with fine performances, stunning visuals, a grand background score and a number of surprisingly touching moments. This story of four African-American Vietnam vets who return to the site of the conflict to retrieve the remains of a fallen colleague and to partake in a dubious treasure hunting venture touches on numerous aspects of the Black soldier’s wartime experience and the lack of recognition for their service both during and after the war. Although somewhat overlong and riddled with a few too many interesting but distracting subplots, the film nevertheless capably addresses its central message effectively without resorting to the excessive rhetoric that often pervades the director’s works. What stands out most, however, are the superb performances of Delroy Lindo and Chadwick Boseman, both of who should easily be on the awards season radar for well-deserved accolades. Despite the picture’s shortcomings, it’s encouraging to see director Lee getting more grounded and back on track here compared to a number of his over-the-top releases of recent years. It’s indeed a pleasure to have the picture’s message given to us without being beaten over the head with it.