Skip to content
Home/‘David Attenborough: A Life on Our Planet’

‘David Attenborough: A Life on Our Planet’ 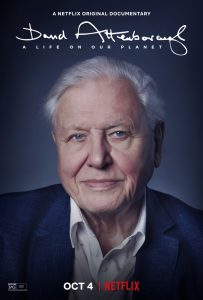 “David Attenborough: A Life on Our Planet”

Legendary broadcaster, documentarian and naturalist David Attenborough’s self-described “witness statement” summarizes the 93-year-old filmmaker’s experience in unwittingly documenting the accelerating decline of the planet’s biodiversity (and overall health) during his lifetime. In doing so, he presents his career of findings and a grim forecast for the future unless we change our ways to “re-wild” the earth and adopt sustainable ways of living in order to prevent an irreversible environmental catastrophe. While the message here is indeed important, the warning urgent, the suggested solutions achievable and the cinematography stunning (for better or worse), the overall production feels rather familiar for it to really stand out as groundbreaking, coming across more like a highly polished but not particularly revelatory cable television documentary than the kind of profound, startling offering that one would expect to see in a theater. The first half also meanders more that it probably should, not quite on par with the better-focused second half in which the material is delivered in a more direct and cogent manner. Mind you, this is not to suggest this offering is without merits, but the praise that has been heaped upon it seems more generous than it probably deserves to be.