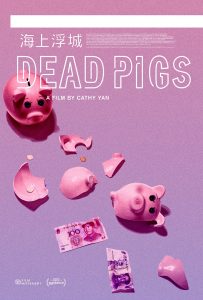 The connections that bind us are sometimes rooted in the strangest of circumstances, as is the case in this fact-based Chinese comedy-drama about the mystery of thousands of dead pigs found floating down the Huangpu River near Shanghai. Who would think that such an unusual phenomenon would come to link the fortunes of a financially strapped pig farmer, a determined homeowner fighting to keep her generations-old family property from being seized by developers, a lovelorn busboy pining for a rich girl involved with a shady businessman and an American expat seeking to make a name for himself in Chinese real estate. The delightful narrative, loaded with whimsical twists and turns, hearty belly laughs and just the right amount of understated campiness, combine to make for a thoroughly entertaining mix, as well as a thoughtful meditation on knowing when to hold on and when to let go. Director Cathy Yan’s recently released 2018 debut feature sags a bit at times in the second half, but that’s a small price to pay for everything else this charming and quirky picture has to offer.