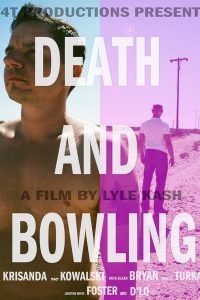 One thing is for sure – this is a film you’re unlikely to forget, even though it doesn’t necessarily work as a cohesive whole. Writer-director Lyle Kash’s debut feature – a meditation on transgender representation in media, specifically the state of “being seen” – indeed makes a statement, even if it isn’t always entirely clear what that statement actually is. In this story of a transgender male would-be actor who often feels lost and invisible, he takes comfort in his relationship with his lesbian bowling team, particularly its wise, compassionate, no-nonsense aging captain. But, when his confidante/mother figure dies, he feels even more adrift – that is, until he attends her funeral, where he meets her long-absent son, a child no one knew existed. Together, the duo strikes up a bond in their search to find themselves, a process that unfolds on multiple levels. However, despite the film’s strong start and strong finish, it’s unfortunate that it sags in the middle, veering into cryptic, muddled, almost pretentious material that’s, frankly, often difficult to fathom. To its credit, the picture’s inventive visuals, creative cinematography and captivating production design distinguish this effort from what’s seen in many other contemporary releases, and its unique storytelling approach and delightful character development aptly show more than tell. But, when the film attempts to become a little too clever and experimental for its own good, it loses traction – and perhaps even viewer interest – qualities that are difficult to get back. Fortunately, all is not lost, and some of what makes this offering succeed is successfully retrieved, but not before coming perilously close to losing it all – including the impact it was intended to have.