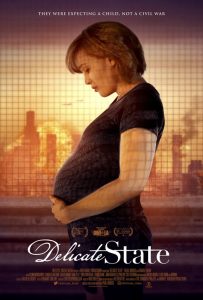 Imagine if you were parents-to-be, blissfully happy about the impending blessed event, when suddenly a devastating civil war breaks out. That’s what happens to a young middle class couple living in an unidentified American city as they await the birth of their first child, all the details of which are recorded in detail in a video diary filmed during the increasingly troubled pregnancy. After a somewhat slow and slightly unfocused start, writer-actor-director Paula Rhodes’s debut feature soon changes lanes and tells a chilling story that grows ever-more compelling as it unfolds, leaving viewers on edge as they witness developments taking place in a simulated real-time context. The picture brings an added touch of realism to the narrative as it was filmed during the actor-director’s own pregnancy, accompanied by real-life husband Charlie Bodin as the protagonist’s co-star. The result is a startlingly eclectic mix of unnerving terror and relentless hope fused into one story with an all-too-familiar sociopolitical backdrop. Handily, this is one of the most unusual releases I’ve seen in some time, yet it offers us a potent cautionary tale that we had better take seriously if we expect our society to survive – or run the risk of lawless, uncontrolled collapse.