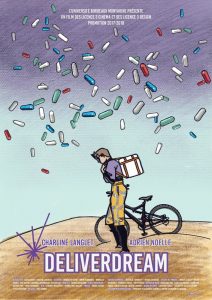 In the dystopian world of 2089, the Solitar Corporation has convinced much of the world that the construction of a glass sphere around the globe is the only salvation to the planet’s pending ecological apocalypse. Loyal workers of the company are rewarded for their efforts through special dreaming pills that enable them to live out their fantasies in their sleep given dwindling material resources to make them happen tangibly. But are they (and the world) being told the truth about what’s really happening? That’s what a pair of romantic partners and co-workers are about to find out – and in a most unlikely way at that. Such is the premise of this inventive offering from directors Alexis Genty and Pauline Lafargue. While the film could use some brisker pacing and a script that’s a little less cryptic in the opening half, as well as some more polished special effects, the story nevertheless stems from insightful assertions drawn from contemporary public debates and grows ever more engaging the further one gets into the story, one that echoes themes in such works as “THX 1138” (1971). It speaks to deeper truths that are intentionally being kept hidden and provides clues into how they might be discovered – a message not only for the characters but for us as well. “Deliverdream” may not be technically perfect, but it’s certainly thought-provoking, showing that the difference between science fiction and science fact may not be as great as many of us would like to believe it is.