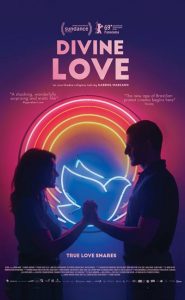 In a Brazil of the near future in which fundamentalist Christianity has insidiously ingratiated itself into what is still a supposedly secular state, elements of the church and its ideology have intrusively invaded virtually every aspect of everyday life, affecting the rights of everyone, including non-believing “infidels.” A society that has welcomed ecclesiastical discos and drive-through pastoral advice centers into its midst has also become one tinged with the faith’s contemporary bureaucracy and beliefs about blasphemy. It’s also one in which unbridled sexuality has been hypocritically rationalized into existence as part of its alleged sacred doctrines. But what happens when those “values” become toppled by unexpected and seemingly miraculous events that don’t jibe with its dogma? That’s what director Gabriel Mascaro’s wickedly biting satire exposes, a humorous but stern cautionary tale of what can happen when religious conformity threatens to become so pervasive that it presents a clear and present danger to a nation’s citizenry. As is the case with many of Mascaro’s films, this offering includes a number of protracted and explicit sex sequences, so sensitive viewers be warned, but their inclusion is all part of the phony piety that goes into the rituals, practices and beliefs of a faith-based movement that essentially rings hollow and deserves to be exposed as such.